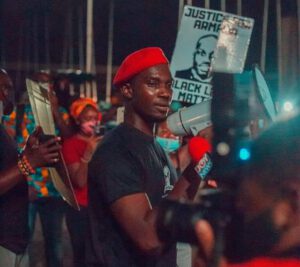 The police have arrested Ernesto Yeboah for organising a protest walk for late George Floyd, who was killed brutally murdered in the United States

The police say Mr Yeboah and his Economic Freedom Fighters were in breach of the Public Order Act because their protest was not authorized by the police.

The group told britishaccra.com in an interview that armed police and military personnel stormed the vigil grounds at the Black Star Square and whisked Mr Yeboah away to either the Osu or Ministries police station.

Britishaccra.com can however report that Mr Yeboah was taken to the police headquarters.

The group insists its leaders notified the police five days ahead of time.

“We’re going to storm the police station where they’ve taken him”, Mr Abeiku Adams, Commander in Charge of Solidarity of the Fighters told our reporter.

A few days ago, the Accra Regional Police Command warned the public against holding any George Floyd-related protests because of its possibilities of spiking Covid-19 infection in Ghana

President Nana Addo Dankwa Akuffo-Addo will be naming his new government from next week, Dailymailgh.com can reveal. Deep throat sources from the corridors of power...
Read more
Politics

President Nana Addo Dankwa Akufo-Addohas done away with eight of the new ministries he created in his first term. It is trite knowledge that the...
Read more

READ  Video: Executive interference is not sufficient grounds for Amidu’s resignation – Kweku Baako
By continuing to browse the site you are agreeing to our use of cookies.