#Brownpaperbag reopened conversations about who raps better-Sarkodie or M.anifest? 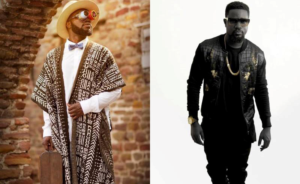 Rapper Sarkodie after releasing his single-Brown Paper Bag which features colleague rapper M.anifest generated a conversation about who raps better.The rap tune focused on  African unity but it also has lyrics about other topic such colonialism, slavery, neo-colonialism, racism, pollution, corrupt leaders, Ghana Beyond Aid and religion.

This inadvertently reignited the debate about who raps better with some Twitter fans focusing on who murdered the rap in the song.

Sarkodie has already reacted on Twitter to encouraging followers to focus on the message in the song and not necessarily who raps better.

He stated: “I understand Rap fans feeling the need to rate bars and lyrics on this record but on God this ain’t about all of that … we in serious times and the message is very important… big up @manifestive #BrownPaperBag”.

British Accrahttp://britishaccra.com
Previous articleAiring TV series without classification after July 1,2020 is against the law
Next articleLil Wayne finally apologise to Zack,his former Manager

Joe Mettle’s marriage will last long because he married from the Volta region.See Video

Counsellor Lutterodt has opine on Joe Mettle's marriage and stating that his marriage will last because of the tribe he has married from. The Ghanaian...
Read more
Entertainment News

Information trending online has it that Mzbel has been arrested by Ghana Police. Details are that She,Mzbel was arrested by the Greater Accra Regional Police...
Read more
Entertainment News

Dancehall artiste, Stonebwoy has called on his fans not to lose focus and work towards making the brand solid. Stonebwoy has been in the news...
Read more

No need for change when all development needed is ongoing -Kuffour

READ  I am never broke-Reggie Rockstone
Former President John Agyekum Kufour has admonished the people of Ghana to maintain the Akufo-Addo, Bawumia administration. According to him, under the able leadership of...
Read more

There’s no Voltarian, Ashanti, ‘Dombo’ or ‘Busia’ person on Agyapa Royalties board – Amidu

Former Special Prosecutor, Martin Amidu, among his list of assertions in his latest epistle, says the absence of representatives from some sections of the...
Read more

Jordan Henderson was left fuming at VAR after Liverpool were denied victory at Brighton by a late penalty call, with Seagulls striker Danny Welbeck...
Read more

Frank Lampard is not under title pressure at Chelsea despite a big summer spend, says Jimmy Floyd Hasselbaink, with Jose Mourinho considered to face...
Read more

Goal Ultimate 11 powered by FIFA 21 | Luka Modric is the best central midfielder in the world!

Real Madrid midfielder Luka Modric was voted as the best player in the world in his position, beating out stronger opponents becoming the seventh...
Read more

READ  Lil Wayne finally apologise to Zack,his former Manager
By continuing to browse the site you are agreeing to our use of cookies.