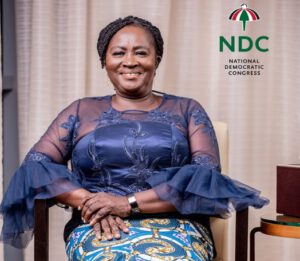 There is a growing recognition of the untapped capacity and talents of women and women’s leadership. The meaningful participation of women in community,local and national leadership roles has become an important focus on global development policy.

Over the last two decades, the Ghanaian political system has been of male dominance having low participation of women in the decision-making process. As at 2016, Ghana has only 31 of its 275 parliamentarians as women with less than 30% being Ministers of State and District Chief Executives. This can be attributed to factors such as leadership roles which are still seen as being more masculine, indicating societies should be led by men, thereby relegating women into the background of political decision making in Ghana.

The National Democratic Congress which is the major political opposition party in this effect has raised the bar by breaking the gender barrier and selected an accomplished woman as a potential Vice President of the country.

The announcement of Professor Naana Opoku Agyemang as the running mate for John Mahama earlier this week has become a debatable topic for discussion in the Ghanaian political fraternity. To many observers, this will bring dignity, freshness, and hope for women as well as meet the reasonable and legitimate expectation of women in the country.

Other observers have also criticised that, although the newly elected running mate is poised, balanced, and very calm, she does not have qualities in governance to affect any change in the country. However, some scholars have also argued that criticism of Mahama’s vice president selection should be base on her track records instead.

Before the selection of Professor Naana Opoku-Agyemang as the running mate for ex-president Mahama, most people opined that such a person must come from the majority Akan or Volta regions since the flag bearer is from a minority ethnic region. However, it can undoubtedly be said that since 1992, the central region has been on the NDC ticket either as flag bearer or running mate in all the elections and this time around the trend has been repeated. Can this cause disaffection to the NDC? Will the Fante trend work this time around? Why not Ewe, Ashanti, Ga or any other ethnic group aside his, to balance the representation on the tickets?

Of course, Professor Naana Opoku Agyemang may have enough political clout to bring huge support to the NDC ticket and appeal to the masses on gender basis since over 1,000,000 women across the country have declared their support and votes for her just because she is a woman and that is the time they said they have been waiting for. Most women say they are going to campaign and vote for NDC so that the woman can become the first female vice president in Ghana. This is a great resume for women empowerment but why couldn’t Mahama get some whose face resonates well with the grassroots and a hardcore political campaigner?

In a political climate like Ghana, parties will consider the nationality, education and career, religion and political antecedents of the running mate. Notwithstanding the COVID-19’s limitation on campaign activities, the NDC must still find a way to make their appointed vice president known in the grassroots and all other fields. Some say they must spend more time to market her within this short time rather than selling their campaign message. But does that really matter? Does the calibre of a running mate determine the fate of the flag bearer in an election?

Reasons why 1st July is no longer a holiday in Ghana

The President of Ghana, Nana Addo Dankwa Akufo-Addo is likely to address the nation later tonight on the news measures to control the spread...
Read more
Politics

News reaching britishaccra.com indicates that the new Nigerian high Commision building in Ghana have been demolished.Report have it that the building was demolished in...
Read more
Politics

The police have arrested Ernesto Yeboah for organising a protest walk for late George Floyd, who was killed brutally murdered in the United States The...
Read more

I am never broke-Reggie Rockstone

Ghanaian Rapper and Pioneer of the Hip-life development in Ghana, Reggie Rockstone has sent a solid message to individuals calling him poor as he...
Read more

My “beef” with Funny Face is not over-Lil Wayne

Kumawood star, Kwadwo Nkansah, renowned as Lil Win has shown that his beef with funny Face is not yet over. While talking with Zionfelix, Lil...
Read more

There is a growing recognition of the untapped capacity and talents of women and women’s leadership. The meaningful participation of women in community,local and...
Read more

Being a Dancehall artiste doesn’t mean you should be naked – Counselor Lutterodts slams Ak songtress.

Reasons why 1st July is no longer a holiday in Ghana

READ  The New Nigerian High Commission building demolished in Ghana
By continuing to browse the site you are agreeing to our use of cookies.