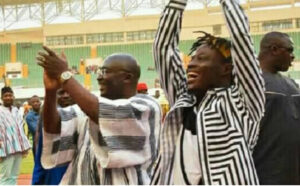 Vice President Dr Mahamudu Bawumia who revealed this in a radio interview in Tamale as part of his 10-day tour of the north, disclosed that the matter came up while having a discussion with the musician.

“The decision to build the recording studios was an idea by Fancy Gadam while we were having a discussion. I realized it was a very laudable idea considering how music has transformed in the north and then I thought we could prioritize it with the studios” he revealed.

It is to offer the brilliant array of multi-talented artistes the platform to unearth their skills with an affordable and professional recording studio in a flexible environment, allowing all the chance to step up and take musical careers to the next level

At the recent launch of the NPP manifesto, the Vice President, Dr Mahamudu Bawumia, said the Party sees the Creative Arts industry as a major growth pole with so many talents, which have been bedeviled with access to studios due to lack of capital, hence their determined to address the challenge accordingly.

Aimed at creating jobs and empowering the people especially the youth with interest, the facility will offer a renting space for their recordings.

The Party also assured of the completion of Kumasi theatre, and commence construction of new ones in Takoradi and Tamale.

Ghanaian female artiste Mzbel has come out to say that the Chief Priest of The Ga Traditional court took 2000 Ghana cedis from her...
Read more
Entertainment News

Photos: Clemento Suarez Steps Out With His Curvaceous Wife For The First Time In Grand Style

Clement Ashiteye known as Clemento Suarez, is a Ghanaian comedian and actor. The sensational comedian who got married sometime last year stepped out with his...
Read more
Entertainment News

Video: Rapper Plies shows off his pearly white smile… after throwing a FUNERAL for the gold teeth he became famous for: ‘My mom cried’

American rapper Plies is in a great stage of transformation as he has removed and buried all his golden tooth in his backyard. Plies was...
Read more
Entertainment News

Adebayor has spoken about his faith, saying, "Everything I do in life I put in the hands of God, my creator. He gave me...
Read more
READ  #FreeBulldogNow-Social Media users call for Bulldog release

READ  Ghanaian men are sweet,treat them well-Victoria Kimani
By continuing to browse the site you are agreeing to our use of cookies.