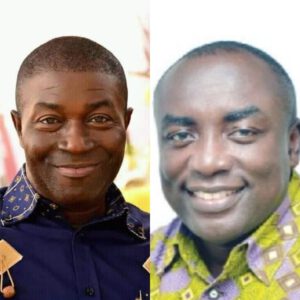 British Accra has picked up reports that former General Secretary of the governing New Patriotic Party (NPP) Kwabena Agyei Agyapong, will this week join the Akufo-Addo 2020 campaign, as reports suggest panic in the ruling party as well as the Akufo-Addo government with bigwigs being afraid of a defeat.

The President is expected in the NPP stronghold of Ashanti Region, this week and reports from party insiders in Accra and Kumasi are that he will be seen with Kwabena Agyapong.

The engineer turned politician, will not be the only bigwig that will be seen in the national campaign, because former Member of Parliament (MP) for Okaikoi South, Nana Akomea, is also penciled as one of the new faces of the campaign, which is yet to gather momentum, following Peter Mac-Manu’s return from COVID-19 treatment.

The two, have been off the party activities and media engagements for separate reasons. While, Mr Agyapong, is expected to give some Asante flavour to the campaign, Nana Akomea, is billed to head the Communications wing of the party, where Yaw Buabeng Asamoah, the MP for Adenta, has been seen struggling.

The two are being roped into the campaign, because it is emerging that, panic has set in the team led by Peter Mac-Menu and it is expected that, their involvement will bring fresh fire and energy.

There had been high hopes about the capabilities of the Campaign Chairman, Mr Mac-Manu, but time according to insiders, has exposed his rusty nature, hence the decision to inject new blood.

It is getting interesting, how these gentlemen, are being brought back into the NPP campaign to seek second term for President Akufo-Addo and his Vice President, Dr. Mahamudu Bawumia, considering the circumstances that led to the exclusion of for instance, Mr Agyapong from the party’s activities.

In the run up to the December 2016 general elections, Mr Agyapong, was suspended from the NPP, over claims that he was working against the party’s fortunes. Among others, he was also accused of collecting aland cruiser from the then President John Maham,a which obviously was denied by him.

Kwabena, who was ousted out of the party together with the then national chairman, Paul Afoko, Second Vice Chairman, Sammy Crabbe, party founders, Dr. Nyaho Nyaho Tamakloe and Dr. Charles Wereko Brobbey, was attacked many times by party militia group, Invisible Forces at NPP’s Asylum Down national headquarters.

READ  The Battle of the legal titans; Tsatsu Tsikata Vs Akoto-Ampaw

In one instance, the said vehicle was vandalized by Nana Akufo-Addo loyalist, Hajia Fati.

At the time, the party was convinced that the only way the NPP was going to win political power in 2016, was the final removal of these bigwigs.

Nana Akomea on the other hand, was part and parcel of the in 2016 campaign team, serving as Director of Communications, but got sidelined after winning power.

The former Minister of Information under the erstwhile John Agyekum Kufuor administration, had hoped to bag another ministerial appointment, but shockingly, that opportunity eluded him.

He ended up at the State Transport Company (STC) as it Managing Director (MD).

As if still angry, Nana Akomea, has remained quiet, hardly seen in the political discourse. It is therefore interesting learning the two gentlemen are coming back to salvage a government dealing with a massive scandal; Agyapa deal in an election year.

The government which campaigned on corruption mantra, has been embroiled in several corruption allegations with the latest being the $1 billion Agyapa Royalties deal, involving the President’s cousins and Finance Minister, Ken Ofori Atta, Gabby Otchere Darko and son of the Senior Minister, Kofi Osafo-Marfo.

It is feared the allegation of friends and family deals in this particular agreement, may go a long way to affect the fortunes of the government.

Its 2020 manifesto is currently not being discussed. Regional tours by President and his Vice, Dr. Bawumia, have also been overshadowed by the Agyapa scandal.

The NPP is hoping that the launch of the NDC’s manifesto on Monday, 7th September 2020, will help redirect the ruling party’s 2020 campaign communication from the Agyapa scandal to what it has done in the last four years against the promises made in 2016 election.

British Accrahttp://britishaccra.com
Previous articleCoronavirus: Some travelers returning to Ghana have tested positive – Dr. Okoe-Boye
Next articleShatta Wale will never be part of the VGMAS again-Bulldog

President Nana Addo Dankwa Akuffo-Addo will be naming his new government from next week, Dailymailgh.com can reveal. Deep throat sources from the corridors of power...
Read more
READ  Some details of President Akuffo Addo’s 10TH COVID-19 address for tonight.
Politics

President Nana Addo Dankwa Akufo-Addohas done away with eight of the new ministries he created in his first term. It is trite knowledge that the...
Read more
Politics

The Speaker of Parliament, Alban Bagbin says the New Patriotic Party (NPP) Caucus and the Independent MP for Fomena Constituency constitute the majority in...
Read more

READ  Reasons why 1st July is no longer a holiday in Ghana
By continuing to browse the site you are agreeing to our use of cookies.