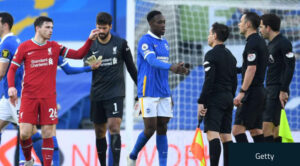 Jordan Henderson was left fuming at VAR after Liverpool were denied victory at Brighton by a late penalty call, with Seagulls striker Danny Welbeck admitting that a spot-kick award was “soft”.

Jurgen Klopp’s side appeared to have avoided any arguments against technology as they entered stoppage-time at the Amex Stadium.

Mohamed Salah and Sadio Mane had seen goals ruled out for offside on the south coast, but in-form Diogo Jota made one opportunity count and had Liverpool on course for a hard-fought

There was, however, to be late drama as Andy Robertson took a wild swing at clearing the ball inside the box and connected with the boot of Seagulls striker Welbeck.

“I’ve seen the replay. Who would be happy? It’s not a pen. It feels like we’re standing here every week and discussing incidents. I don’t want to get into trouble, but for me it’s not a penalty.

“Obviously the referees know better than us, but I thought the lads were brilliant today and deserve the three points.

“In the first half there were things we could improve on, in the second half we did that.

“We had a couple of goals ruled off for offside. Overall we’ve got to be positive and take the performance out of it, because the result isn’t anything else but an error in my option.

READ  Man Utd may have to sell after 'embarrassing' Raiola comments, says Berbatov

“You’d rather get beat by two or three than end up like that. It feels like two points taken away from us.”

Liverpool had survived an early scare at the Amex, with Neal Maupay firing a penalty for Brighton wide of the post.

He was then forced off through injury, while James Milner and former Reds star Adam Lallana also picked up untimely knocks on a dramatic afternoon.

Majeed Ashimeru The world will be a better place if we can look after our love ones like Majeed Ashimeru who has gifted his elder...
Read more
Sports

Razak pimpong was a Ghanian professional footballer who is now a retired player. The 38 year old played as mildfielder for the Black stars...
Read more
Sports

‘When I die,I want to go out on a football pitch’-Napoli boss Gattuso reveals

The Italian head coach has confirmed he has been suffering from a flare up of ocular myasthenia Napoli boss Gennaro Gattuso has revealed his struggles...
Read more
Sports

READ  Kwadwo Asamoah set to join Salernitana or Montreal Impact
By continuing to browse the site you are agreeing to our use of cookies.