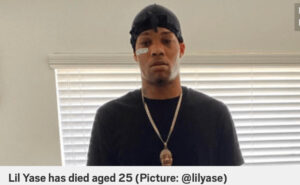 The musician, real name Mark Antonyyo Alexander, was reportedly shot dead on Saturday morning however the circumstances surrounding his death are currently unknown.  According to TMZ, Lil Yase was at a recording studio with friends in Marin County, close to San Francisco, California on Friday night.  At around 11:30pm, the rapper excused himself from the group and said he would return shortly. His friends then heard that he had been shot dead in the East Bay around an hour and a half later.  East Bay is around an hour away from the recording studio and Lil Yase’s friends are said to be confused as to what happened. The rapper reportedly wasn’t involved in any feuds and instead focused on his music and promoting his record label Highway 420 Productions as well as gaming.

Hours before his death, Lil Yase had posted a photo of himself standing on a staircase with a drink in hand and the caption: ‘If my n**** trippin den I’m trippin it’s up wit UNK😤😈

#HappyThanksGivin.’  Local police are yet to comment on the incident.  Tributes have poured in for the rapper with one friend commenting on Instagram: ‘Rip yase we was talking last night Ionno what went wrong but I send mine.’  ‘Always showed love rest easy,’ another said.  One fan tweeted: ‘RIP Lil Yase. “Pull Up” with Drakeo was a genuine Bay to LA classic, one of the first to really set off the next wave of West Coast rap. Another tragedy in a year filled with little else.’

Celebrating his musical talent, another said: ‘RIP Lil Yase From the Block Too Alot… the whole album’s crazy, instant Bay classic for sure!’  Lil Yase, who hailed from Sunnydale, California, rose to fame in 2015 with the single Get It In which was followed by an equally popular remix.  Darth Vader actor David Prowse dies aged 85 The rapper went on to release tracks such as No Diss, Demon, What You Mean, Yeah Yeah, Furl, Bum B**** and Mad, Workin.  He also collaborated with artists such as Yalla, A.B. Milli, Cash Kidd, G-Val, That Boy Tyson, Stunna June, IamSu!, Shoreline Mafia.

Facebook Inc has suspended former US President Donald Trump's Facebook and Instagram accounts for two years.He was barred indefinitely from both sites in January...
Read more