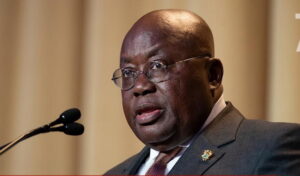 President Nana Addo Dankwa Akufo-Addohas done away with eight of the new ministries he created in his first term.

It is trite knowledge that the President has no space to create a large number of ministries and appoint 123 ministers because of Ghana’s hung parliament status.

In the end, there were 59 ministers with various designations; 16 regional ministers; and 48 deputy ministers, bringing the net total to 123.

Ghana’s constitution requires that at least half of the ministers must be MPs. For his second term, the President’s NPP party has 137 seats, the same number as the NDC.

On Saturday, a news report by Asaaseradio.com, a quasi-government mouthpiece, sighted by GhanaWeb indicated that for the President’s second term, some seven specialised ministries that were created when he assumed office on January 7, 2017, will not function in his second term, giving two reasons.

This is because they “have accomplished the purpose for which they were set up, which was the work of establishing those priority projects and programmes. Also, the ministries are being collapsed in response to public criticism of the record size of the President’s first term government,” Asaase.com reported.

The pro-NPP news portal reports that the President will cut down the number of ministers by at least 30%. It will mostly affect deputy ministers of state.

So far eight ministries have been pencilled to be made redundant, with their functions being given back to the traditional ministries.

4) Ministry of Mobilisation and Regional Reorganization;

5) Ministry of Monitoring and Evaluation;

7) Ministry of Planning; and

The research department of the Office of the President at the Jubilee House is expected to be revamped to perform the function of the Ministry of Monitoring and Evaluation and will be headed by Dr. Isaac Owusu Mensah, according to the Asaase report.

The final funeral rites of the late former President Jerry John Rawlings have finally begun. On Sunday, January 24, 2021, the family and other...
Read more
Politics

President Nana Addo Dankwa Akuffo-Addo will be naming his new government from next week, Dailymailgh.com can reveal.Deep throat sources from the corridors of power...
Read more
Politics

READ  KsTU research centre projects at least 51.4 percent victory for NPP
Image; Lawyers, Akoto Ampaw and Tsatsu Tsikata.Just like in 2012, another historical legal battle is yet to unravel at the Supreme Court of Ghana...
Read more

READ  Video: Executive interference is not sufficient grounds for Amidu’s resignation – Kweku Baako
By continuing to browse the site you are agreeing to our use of cookies.