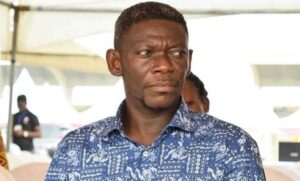 The Chief Executive Officer (CEO) of Miracle Films, Samuel Nyamekye, has stated emphatically that producers of the local movie Industry (Kumawood) never plotted the downfall of the popular Kumawood actor Kofi Adu, popularly known as Agya Koo, but himself.

The comic actor has been off the screens in recent years, having previously been one of the people’s favourites.

There were allegations from Agya Koo’s management that Kumawood producers, directors and actors had a meeting to sideline him and cut him off the scenes.

But Mr Nyamekye, in an interview with Kumasi based Angel FM, denied allegations levelled against Kumawood producers about the downfall of Agya Koo.

According to evangelist Samuel Nyamekye, Kumawood producers, directors and actors never plotted to bring Agya Koo down but rather devised a new strategy.

“Ike, the issue is we (producers), directors and the actors had a meeting to discuss how to work effectively when Agya Koo is not in Ghana. Agya Koo was a very good actor and Ghanaians always bought movies which he has featured Agya Koo because without Agya Koo they won’t buy the movie,” Mr Nyamekye explained.

“Due to that, Agya Koo became popular even outside Ghana so sometimes Ghanaians in other countries will invite him for shows and movies. When he (Agya Koo) travels, Kumawood producers, directors and actors cannot work because we have to wait for Agya Koo to come,” he said.

Disney and Pixar's new trailer for Lightyear has shed some more light on the mysterious Toy Story spin-off movie.Marvel's Chris Evans puts on the spacesuit in this all-new feature film...
Read more
Movie

Slide 1 of 24: The best Netflix action movies aren't hard to find, because the streamer is packed with movies that'll have you hovering...
Read more
Movie