Hot Gossip: Drake hops out of his $1.8million Mercedes truck before boarding his $200million private Boeing 767 Jet dubbed ‘Air Drake’ as he flies out of LA 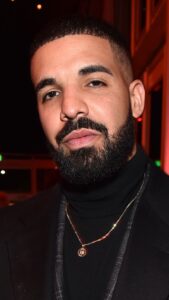 He’s one of the most renowned and richest rappers in the world.

And so it was little wonder Drake opted to travel in luxury on Tuesday as he climbed out of his $1.8 million Mercedes Maybach G650 Landaulet truck before boarding his private Boeing 767 Jet as he jetted out of LA.

The rapper, 34, cut a casual figure in a green jacket and navy joggers as he stepped out on the tarmac before heading off in his aircraft dubbed ‘Air Drake’, which was customised by Off-White chief executive Virgil Abloh, 40.

Sporting chunky white trainers and carrying a bottle of water Drake made his way onto the luxurious aircraft which he acquired in 2019 – gifted to him by CargoJet’s President and CEO Ajay Virmani.

Ensuring that he always travelled in style, last year Drake had the plane customised by none other that Virgil Abloh.

The American designer remodelled the jet with a blue sky background dotted with fluffy white clouds, with the design a nod to the cover art of  Drake’s 2013 album Nothing Was the Same.

And while Virgil is known for his work in fashion, as well as being a DJ and entrepreneur, he also has a a civil engineering degree, which no doubt came in handy when redesigning the plane’s look.

While the outside of the aircraft was emblazoned with the OVO owl symbol and ‘ABLOH ENGINEERING’, along with the moniker ‘Air Drake’.

See also  Opinion: Sarkodie thinks his brand is bigger than every musician in Ghana

OVO stands for Drake’s company – October’s Very Own – and for his record label OVO sound.

Meanwhile, the belly of the plane featured the hilarious slogan: ‘If you’re reading this we left’.

Ahead of the makeover, the Hotline Bling hitmaker previously gave fans a tour of his jet on Instagram, showing off the plane’s plush interior featuring luxury gold and brown sofas adorned with gold walls.

During his tour, the Canadian native proudly boasted: ‘No rental, no timeshare, no co-owners’ as he assured fans that the aircraft was his.

But he didn’t forget to thank Canadian airline CargoJet for the gift, acknowledging the company’s CEO Ajay Virmani as he added: ‘That guy made it happen right there, that’s the man.’

In a statement at the time, Ajay said: ‘We are very excited to partner with Drake as our ambassador and assisting him with his logistical needs and requirements.

‘We have had a lengthy relationship with Drake and this partnership has grown organically between both parties. Cargojet and Drake are both great Canadian successes, we are thrilled to be partnering together.’

Meanwhile, while Drake’s travel arrangements are in order, he appears to be set to sort out his love life as he’s reportedly set his sights on Kim Kardashian, who has become newly-single after filing for divorce from husband Kanye West in February.

He is said to have started messaging the Keeping Up With The Kardashians star when it was clear her marriage with Kanye was ending.

It comes after Drake cryptically mentioned Kanye on his new song Wants and Needs, which sparked fans to question whether the Hotline Bling hitmaker and Kim, 40, had a fling previously.

A source told Heat: ‘Drake could never understand what Kim saw in Kanye – he was saying for years how he wasn’t the right guy for Kim and it would all end in tears.

‘He was surprised it took her so long to realise, and started messaging her the moment it became clear that the divorce was inevitable, he’s ready to see her whenever she says the word, basically, and he’s confident that will happen fairly soon.’

However the insider told the publication, Kim isn’t interested in pursuing a relationship with anyone just yet.

They said: ‘Kim’s wary about getting involved with someone else too fast before the divorce is settled.’

Some Ghanaian personalities within the entertainment industry are set to attend the 2021 edition of ZAFAA Awards launch in the United Kingdom.The Ghanaian representative...
Read more
Entertainment News