Video: Scenes of Asantehene kneeling before a white man in church for prayers in the UK pops up 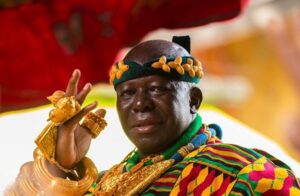 Asantehene, Nana Otumfuo Osei Tutu II has been in the news lately for all the good and bad reasons.

First, it was the video of him exposing some government officials who asked him no to say bad things about the government concerning the illegalities of small scale mining which has become a subject of interest for many Ghanaians.

Weeks after exposing the government official, popular US-based Ghanaian critic, Twene Jonas took him on together with all traditional rulers in Ghana.

Twene Jonas called the Ashanti King a failure who had taken a bribe from the Government to stop him from speaking against illegal mining activities that are ruining our water bodies.

Following his critic and insults, some chiefs have rained curses on Twene Jonas with one of Asantehene’s chiefs asking Jonas to fly down to kneel in front of the King to render an apology for spewing garbage against their chief.

The latest about the Asantehene has to do with a video of him receiving prayers in an Anglican Church in England.

In the video, the Asantehene is seen kneeling in front of a white priest who poured oil on his head and used his palm to rub the surface of the head.

Apparently, he went through this ritual whiles taking the communion whiles on a visit to our colonial master’s land.

The video has attracted mixed reactions from people who view his actions as an insult to tradition and others who see nothing wrong with it from the Christian point of view.

One social media user commented; He’s serving the god of Isreal and you thi

Dean of School of Information and Communication Studies of the University of Ghana has said the country has to hold the Akufo-Addo to his...
Read more
See also  Prince Philip,Duke Of Edinburgh and Queen Elizabeth’s husband has died,Buckingham Palace reports