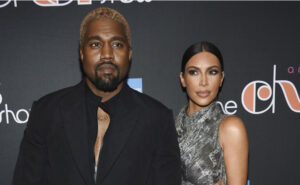 Kim Kardashian felt like a failure as her marriage to Kanye West was crumbling earlier this year.

“I feel like a f— failure, that it’s, like, a third f— marriage,” the 40-year-old mom and entrepreneur said in a flashback clip during Thursday’s episode of “Keeping Up With the Kardashians.” “Yeah I feel like a f— loser. But I can’t even think about that like, I want to be happy.”

Kardashian had been “redirecting” her frustration and sadness and anger, sister Khloé Kardashian said in a confessional, while struggling with the decline of her relationship with the rapper. So that plate of cookies left in their Lake Tahoe vacation home during the episode didn’t fare well.

“Did I not say no to these cookies? … I’m going to throw them in the toilet,” Kim says back in the present, which appears to have been sometime in December, exploding over the snacks she says will add 15 pounds to her frame. “I just want to go to my room and never come out.”

The flashback takes place after a blowout between the Kardashian-Wests before the women took off on their trip to Northern California.

Sobbing into a handful of tissues, Kim declares that Kanye “deserves someone that can go support his every move and go follow him all over the place and move to Wyoming. I can’t do that.”

She goes full crying-Kim meme as she talks about feeling like a failure. The couple had reportedly been in marriage counseling for much of 2020.

“I honestly can’t do this anymore,” she says while recapping their fight to her sisters. “Why am I still in this like, place where I’m stuck for years? Like, he goes and moves to a different state, every year, I have to be together so I can raise the kids, you know?”

Still, she does call the “Yeezus” rapper an “amazing dad” to kids North, Saint, Chicago and Psalm.

Khloe, back in a confessional, calls her sister “one of the most incredible people ever” and hopes that she will take care of herself like she attempted to take care of her marriage.

We know how it ends, of course: Kim filed for divorce from Kanye in mid-February after word leaked in January that they were heading for a split. The case is still in court.

But how does “Keeping Up With the Kardashians” wind down? That’ll be revealed in the June 10 episode, titled “The End: Part 2,” capping a long run for the reality show that changed the world.

British Accrahttp://britishaccra.com
Previous articleSerena Williams reaches fourth round as draw opens u
Next articleT B Joshua is Dead.See details

15 films to look out for in the Oscars race

It’s hard to talk about film right now without mentioning Covid. The virus has had a significant impact on cinema audiences as well as...
Read more
Entertainment News

Dwayne Johnson has a response to Vin Diesel’s request that they join forces again onscreen for the final “Fast & Furious” movie.In an interview with CNN, published Wednesday, the “Jungle...
Read more
Entertainment News

VIDEO: RUNDOWN OF ACCRA’S TOP 4 MOST PATRONIZED EVENTS OVER THE WEEKEND

Four of Ghana’s highly anticipated concerts this December unraveled over the weekend and we are here to give you a gist of all that...
Read more

As we round off the year, there are some celebrities who have impressed us with their outstanding fashion sense.Sika Osei, Okyeama Kwame and Nana...
Read more

15 films to look out for in the Oscars race

It’s hard to talk about film right now without mentioning Covid. The virus has had a significant impact on cinema audiences as well as...
Read more