Is there fuel shortage in the UK and why are petrol stations closing? 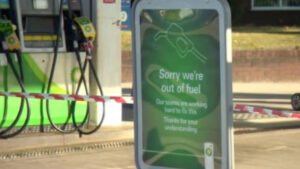 A number of petrol stations in the UK have temporarily closed, with BP and Esso warning of petrol and diesel shortages at some of its stations.

BP said on Thursday it had closed a “handful” of its petrol forecourts due to a lack of available fuel – transport secretary Grant Shapps said as of Thursday five BP petrol stations were affected.

A “small number” of Tesco refilling stations have also been impacted, said Esso owner ExxonMobil, which runs the sites.

The transport secretary added other petrol station operators and supermarkets, including Asda and Morrisons, said they have no problems.

ITV News revealed on Thursday that BP’s Head of UK Retail, Hanna Hofer told a meeting organised by the Cabinet Office the company was preparing to restrict deliveries of fuel.

She said it was important the government understood the “urgency of the situation” which she described as “bad, very bad”.

So what is the situation with fuel and how has it got so bad:

Is there a fuel shortage in the UK?

There’s no shortage of petrol or diesel in the UK.

The shortage at petrol stations is caused by issues with transporting fuel from distribution terminals to forecourts.

Why are petrol stations closing?

Due to the difficulties with transport fuel, BP told the government last Thursday it would restrict deliveries of petrol and diesel to ensure continuity of supply.

Ms Hofer told the government this will mean running 80% of services levels to 90% of BP’s forecourts and that most locations, as a result, will not be restocked for one-and-a-half days a week.

But she said forecourts on motorways will be prioritised and will be restocked as normal.

Ms Hofer said every week the company is experiencing “tens” of “stock outs” at the 1,200 sites it supplies. When this happens forecourts are coned off and temporarily closed.

Why are there supply issues?

The issues with transporting fuel to petrol stations is caused by the ongoing shortage of HGV drivers.

BP has approximately 45 drivers coming through in training but the company is also experiencing high rates of attrition. In the week beginning September 6, ten drivers joined and six left.

Transport secretary Mr Shapps denied that Brexit was the culprit in the UK’s shortage of lorry drivers, arguing that the split from the European Union has helped the government react.

E10: Everything you need to know about the petrol being rolled out at forecourts
John Lewis Chair says government should make it easier to recruit HGV drivers

He told BBC Today: “Not only are there very large and even larger shortages in other EU countries like Poland and Germany, which clearly can’t be to do with Brexit, but actually because of Brexit I’ve been able to change the law and alter the way our driving tests operate in a way I could not have done if we were still part of the EU.”

Rod McKenzie of the Road Haulage Association trade body said on Thursday the government had allowed the driver shortage to get “gradually worse” in recent months.

He added: “I don’t think we are talking about absolutely no fuel or food or anything like that, people shouldn’t panic buy food or fuel or anything else, that’s not what this is about.

What is being done?

BP is calling on the government to help address the driver shortage by making it easier to temporarily recruit HGV drivers from abroad.

BP said it is hopeful fuel stocks at forecourts will stabilise and start to rebuild at some point in October.

Minister for small business, Paul Scully, told ITV News the government is having “regular conversations” to see what it can do to increase the number of HGV drivers and bring drivers back.

But he added: “We also want to see what the industry/sector can do for themselves.”

Transport secretary Mr Shapps told ITV’s Good Morning Britain: “I’ll do whatever it takes to get more HGV drivers on the road.”

He added: “I have already changed the law last week and taken a series of steps which have already doubled the capacity [to get HGV drivers through driving tests here].

“But the real problem is getting people tested and through those tests.”

British Accrahttp://britishaccra.com
Previous articleTrue Inside Story behind the Fake Pregnancy and Kidnapping
Next articleEngland thrash Australia as Jos Buttler hits 71 not out

For a man whose campaign was built on the inevitability of victory, Rishi Sunak could hardly be further from his goal. Three weeks into...
Read more
health

The head of the World Health Organisation said that the committee was unable to decide on whether to declare an emergency, but he decided...
Read more
british