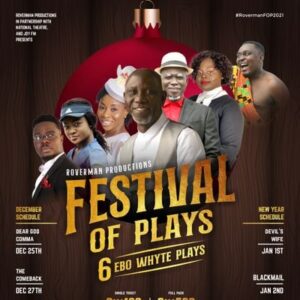 Search no further on what to do during this Christmas festivity because Roverman Productions has a lot in store for your amusement.

Not just three or four, but six amazing stage plays have been lined up to engage Ghanaians from December 25, to January 3, 2022. Nothing but the best were selected to be reenacted. They show at 4pm and 8pm each day; and tickets are going for ¢100.

This Saturday, Mrs Effie Aggrey, a troubled wife pens a letter to God. This is because she is on the brink of a promotion, and her husband Prof. Fiifi Aggrey is being considered to head the company they both work in.

However, an interesting turn of events threatens to throw their achievements down the drain and to salvage the situation, Effie needs to send a memo to God.

See also  Video: Alleged conversation between Tracey Boakye and Mzbel about 'Papa No' pops up

To know if God will receive this memo, grab a ticket to watch “Dear God Comma.”

Again, “The Comeback” returns to the theatre on December 27. What can a man expect after working hard abroad and sending money to his family to set up businesses for him?

A comfortable life back home at least, but for Jojo, the day he returned home was the day he decided to kill his brother and commit suicide. Don’t miss a chance to see how this tragedy unravels.

In “Caught in the Act” showing on December 28, Uncle Ebo Whyte weaves his most intriguing story yet, one about an unbelievable journey of betrayal, blackmail and restoration.

“Caught in the Act” tells the story of Martin who returns from trek to find his wife in bed with another man. That was bad enough for him but when his wife showed no remorse and the strange man asked for privacy; Martin begins to wonder if he’s dreaming.

His nightmare has only just begun as his next move opens the Pandora’s Box and threatens to blow his world and that of his parents apart.

Seen it all? Not yet. On January 1, Roverman reechoes the lives of a groom and bride-to-be who stand in the face of death.

In the play “Devil’s Wife”, you meet Zoe, a beautiful lady and a star in her own right but three men who made the mistake of falling in love and marrying her died on their wedding night before they could consummate the marriage.

Rev. Kweku Kom is also intelligent, a beloved pastor and a rising star in his own right, but the girl he was going to marry 5 years ago also died a few days to the wedding.

Now, Rev. Kom is determined to marry Zoe. Someone will die but who will it be?

Disney and Pixar's new trailer for Lightyear has shed some more light on the mysterious Toy Story spin-off movie.Marvel's Chris Evans puts on the spacesuit in this all-new feature film...
Read more
Culture

Slide 1 of 24: The best Netflix action movies aren't hard to find, because the streamer is packed with movies that'll have you hovering...
Read more
Arts

Woman paid $1,000 so her ex would ‘constantly’ see her face on Instagram

Internet personality Andrea Russett has revealed how she spent £750 to ensure her face would keep appearing on her ex’s social media feed.Sharing the...
Read more

See also  I Will Not Sing Forever, I Just Want to Smoke My Weed In Peace-Peruzzi
By continuing to browse the site you are agreeing to our terms and conditions
MORE STORIES