Alicia Keys shares the inspiration behind her new graphic novel 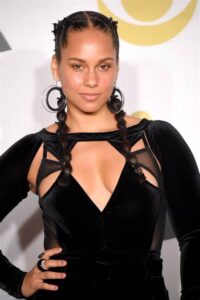 Alicia Keys’ hit song “Girl on Fire” is taking its message of female empowerment to a new audience.

The Grammy winner spoke to CNN about how her 2012 single inspired her new graphic novel of the same name.
“‘Girl On Fire’ is such a special song … I mean, who knew that this song would have this kind of energy, that it would hold and create,” Keys told CNN in an interview this week. “[The book] has been in the works for about five years. It felt like it would be so beautiful to really go deeper into the story of a girl on fire named Lolo, who is being raised in Brooklyn. She’s 17 years old. She has a single father who’s raising herself and her brother and her brother ended up getting harassed by a police officer. Out of the anger and the desire to protect her brother, she discovers that she has this power that she never knew she had.”
The novel’s illustrations were done by Britney Williams and Keys’ co-writer is Andrew Wiener.
“You go on to discover more about her [Lolo], her family and the neighborhood and who she’s actually battling,” Keys added in describing the project. “I think the metaphor is that we all have a superpower and what are we gonna do with it? You know, how are we gonna discover it?”
Keys said she’s already thought about potentially developing the graphic novel into a film or television series.
“Some people are very good at the novel situation and can kind of have their imagination run wild. Some people really want to be immersed in a world that they can see the color and they can read it on the page,” Keys said. “I think that does lend itself very much to potential films, potential series, all these pieces of this incredible girl Lolo that represent all of us.”
See also  I Stopped My Well-paid Job To Do Full-time Business - Cryme Officer Reveals Why He Cannot Let Ogidi Brown Go Scot-free After Terminating His Contract
Facebook
Twitter
Google+
Pinterest
WhatsApp
ReddIt
Tumblr
Telegram
Mix
VK
Digg
LINE
Viber

See also  liveStream: Sarkodie Rapperholic on Desert In Dubai 2022
By continuing to browse the site you are agreeing to our terms and conditions
MORE STORIES