Obi-Wan Kenobi is coming to streaming, as practically anyone with an internet connection knows by now. But is that the ideal venue for a project based on a beloved original “Star Wars” character? And while he might insist “It’s not my fault!,” how much of the blame goes to Han Solo?

These are some of the imponderable questions raised by the funneling of resources to streaming services, with “Obi-Wan Kenobi” — a limited series in which Ewan McGregor reprises his role from the second trilogy — due to land on Disney+ in May.
Watching the very enticing trailer, it’s easy to see this concept as a major movie, and fans flocking to theaters for a story set during that period in which Kenobi quietly watched over a young Luke Skywalker, a decade after “Revenge of the Sith” and before the two meet in “A New Hope.”
Indeed, the first thought consuming the trailer — especially when those strains of composer John Williams’ “Duel of the Fates” kicked in — was just how big an opening weekend a movie version would have registered at the box office.
Alas, we’ll never know, as Disney has prioritized producing must-have content for Disney+, which has outpaced even the most ambitious projections for its growth, reaching nearly 130 million subscribers. At roughly $7 a month, that’s a whole lot of credits, and “Star Wars” shows, like “The Mandalorian,” are obviously a major part of that.
Still, Disney is in the theatrical business as well, where hits have become increasingly elusive, a trend that preceded the pandemic but that has been significantly exacerbated by it. Increasingly, there appears to be a very narrow tier of blockbusters — “Spider-Man: No Way Home” and “The Batman” among the recent examples — that can overcome the gravitational pull of streaming’s tractor beam. For everything else, it’s wait until Netflix or one of its competitors offers it. 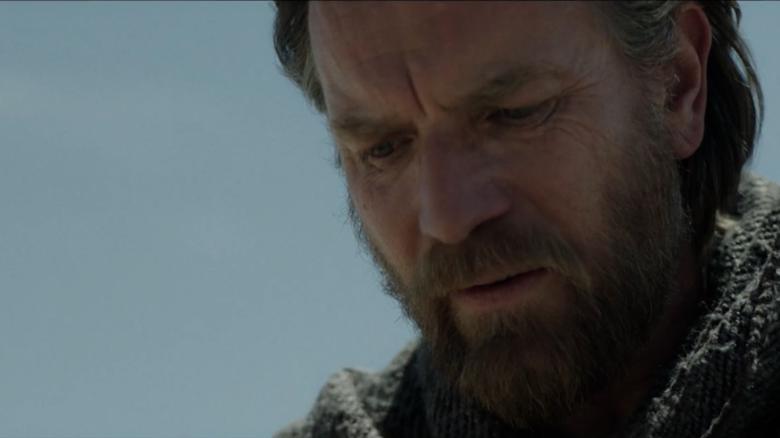 Ewan McGregor as Obi-Wan Kenobi in the upcoming Disney+ series.
An Obi-Wan Kenobi movie, starring McGregor, would seem to have the combination of elements to clear that hurdle. Instead, the studio opted to go the Disney+ route after the disappointing box-office performance by “Solo,” a 2018 prequel that cast Alden Ehrenreich in the title role.
At the time, Collider reported that Disney and Lucasfilm had decided to put all the “Star Wars” spinoff movies “on hold” because of “Solo’s” commercial misfire, which prompted headlines like “‘Solo’ Is Officially the First ‘Star Wars’ Movie to Flop.” That included what was then planned to be an Obi-Wan feature.
“I just think that we might’ve put a little bit too much in the marketplace too fast,” Disney’s then-CEO, Bob Iger, told the New York Times.
Saturating the market was likely a factor. Arguably, though, the studio might have overreacted, in the process underestimating the appeal of the Kenobi character and the lure of having McGregor (as opposed to a recast newcomer) reprise the role.
While it’s fun to speculate and play “What if?,” it will be virtually impossible to sort out whether Disney left money on the outer rim by producing a limited series instead of a movie. People sign up and maintain streaming subscriptions for all sorts of content, although it seems fair to surmise that “Star Wars” fans won’t cancel Disney+ any time before “Kenobi” finishes its run.
The series, incidentally, premieres on May 25, which happens to be the 45th anniversary of the Jedi knight’s debut in “Star Wars,” back in the day before chapter subheads were involved, when people’s at-home alternatives were mostly limited to the three broadcast networks.
Would a Kenobi movie, released on that anniversary with the kind of trailer that just broke the internet, bring people out to theaters today? Let’s just say that if Disney had stuck to its original plans, even with all that’s happened to movie-going, they’d be justified in having a good feeling about this.
See also  Even Samuel L. Jackson's star power can't bring 'The Last Days of Ptolemy' to life
Facebook
Twitter
Google+
Pinterest
WhatsApp
ReddIt
Tumblr
Telegram
Mix
VK
Digg
LINE
Viber

‘The Jennifer Hudson Show’ to debut in fall 2022

Jennifer Hudson is set to host her own talk show.(CNN)There's a new voice coming to the daytime talk show scene.Warner Bros. (which is owned...
Read more

See also  Playing the Prince Philip role: ‘I kind of sided with him’
By continuing to browse the site you are agreeing to our terms and conditions
MORE STORIES