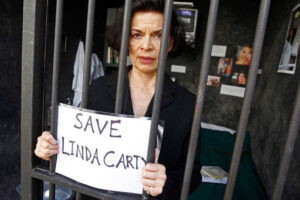 As a loving gran, Linda Carty longs to hug her two grandsons, but she is on death row, the only British woman awaiting execution in the US, and must see visitors through a thick glass divide.

Carty has been on death row in Texas for 20 years for murdering a young mum and trying to steal her four-day-old baby, a crime she still insists she did not commit.

When presenter and journalist Susanna Reid visited her at the Mountain View Unit, a maximum security prison in Texas, Carty told her: “If I were guilty of this crime, I would have taken my punishment.

“Anyone who knows the system knows Texas does not admit when they are wrong. I’ll fight until the end.

“If I lose my life I know I have people behind me who will not stop until they clear my name.” Bianca Jagger has taken up Carty’s case, and human rights group Reprieve is also supporting her.

In May 2001, a court heard that Carty orchestrated the kidnap of her pregnant neighbour, Joana Rodriguez, 25, by three men in Houston, Texas, intending to cut the baby out of Joana’s body.

At the time of the murder, Carty had bought and scrubs and scissors, but Joana had given birth to son Ray four days earlier.

Ray survived the kidnapping and was found in a car the next day, but Joana was found suffocated in the boot of Linda’s car.

Susanna says: “The story is so twisted. Joana was a new mum, she had everything to live for, but died in the most horrific circumstances. Somebody needs to be held accountable for it. At the moment, that’s Linda Carty.”

Born on the island of Saint Kitts before it gained independence from Britain, Carty kept her UK citizenship and passport after moving to Houston, aged 23, with her daughter Jovelle, now mother of Carty’s teenage grandsons Jhori and Caden.

When Carty was arrested, the British consulate in Houston was not informed, as it should have been. And she was assigned the lawyer Jerry Guerinot, a notoriously hopeless attorney who lost all 34 capital cases he defended at trial.

He is said to have met Carty for just 15 minutes before her case and failed to call any defence witnesses at her trial.

The jury convicted Gerald Anderson, Chris Robinson, and Carlos Williams of going to Joana’s home on May 16, 2001, and abducting her and baby Ray.

They said Carty had wanted the baby to bring up herself. The men all received long jail terms, but only Carty got the death sentence.

Asked about her part in the crime in Susanna’s ITV documentary, Carty says: “I can truthfully look you in the eye and tell you I had nothing to do with this crime.”

Now 63, she insists she was framed and her only mistake was lending someone her car. It was used in the kidnapping, but there was no DNA evidence linking her to Joana’s murder.

But Lynn Hardaway, former Harris County Assistant District Attorney, says: “I don’t have any doubt she is guilty. All the evidence was consistent and had her as the ringleader.”

Baby clothes and a baby chair were found in the hotel room where Carty was staying at the time, and she had told her ex-boyfriend she was expecting a baby, but was not pregnant at the time of her arrest.

Carty says she had suffered a miscarriage, but this has never been corroborated by any medical records.

After spending time with Carty, Susanna is still unsure about the verdict. She says: “The fact of the matter is, a woman was found bound and gagged, and she had suffocated.

“It’s horrific. Absolutely horrific. And what the court heard Linda was planning to do with the unborn baby…it’s almost unspeakable.” But she is not 100% convinced Carty was guilty.

© REUTERS Human rights campaigner Bianca JaggerGet all the biggest showbiz news straight to your inbox. Sign up for the free Mirror Showbiz newsletter.

Susanna says: “I found it impossible to come to a final judgment. She has been tried by a jury and found guilty and all her appeals have failed.

@The justice system has found her guilty. But I have been talking to the British lawyer, who has looked into the case and listening to her American defence lawyer, who was pro death penalty before he took her case, and now says, ‘You cannot be pro death penalty when you see the injustice in this case’.

“When you talk to those people about the disputed evidence, you end up thinking, is there more to this? Who was responsible for it?

“What actually happened that night? Was she a wicked, wicked person as one of her co- defendants called her and the ringleader? Or was there a plea deal, which meant that she was held responsible? I don’t think there’s an easy or comfortable answer.”

But she does offer a verdict on death row.

Susanna says: “These are places of despair. And because of the appeals process in the US justice system, these people are there for years and years. Linda’s been there for 20 years.

“There are a huge number of people here who think that the death penalty is a good idea. If you back the death penalty, you have to be absolutely 100% sure, don’t you, that someone is guilty of the crime.”

If Carty is executed, she will be the first British prisoner to be punished with the death penalty since Ruth Ellis in 1955.

Carty says: “I would be lying it I said living in this environment I don’t think about it (execution), but I don’t let it consume my thoughts.”

British Accrahttp://britishaccra.com
Previous articleDoctor explains why people are feeling rubbish but not testing positive for Covid
Next articleWoman paid $1,000 so her ex would ‘constantly’ see her face on Instagram

See also  No need for change when all development needed is ongoing -Kuffour
No one can escape rising prices but one group that will be significantly worse off is pensioners. They could lose £1,500 over the next...
Read more
International news

The decision will come as a huge blow to the Russian President, who had been counting on Beijing's assistance in overcoming Western sanctions. China's president has...
Read more
Politics

US President Joe Biden has denied that he was calling for regime change when he said that Russia's president Vladimir Putin "cannot remain in...
Read more
International news

LIVE – Updated at 05:57 Volodymyr Zelenskiy says new round of negotiations ahead but that deal would have to be subject to referendum; Joe Biden...
Read more

See also  NPP’s Peter Amewu pulling surprises at an NDC stronghold,Hohoe-See figures
By continuing to browse the site you are agreeing to our terms and conditions
MORE STORIES