Illegal Albanian migrants have been deported within days as part of an attempt to speed up removals and counter the surge in Channel crossings. 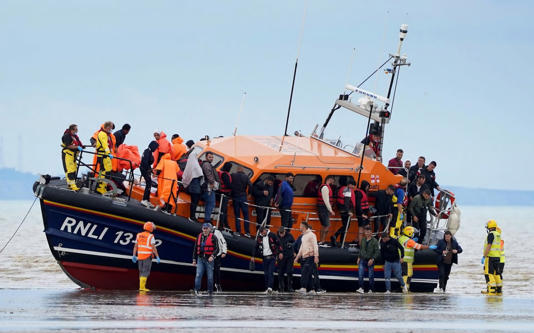 Migrants© Provided by The Telegraph

The Home Office revealed yesterday that five illegal Albanian migrants – including one who arrived in a small boat last month – were deported on a chartered plane back to their home Balkan state.

The Albanian who crossed the Channel arrived just 24 days ago, while a second was deported within three months of sneaking into Britain hidden in a lorry. A third was removed within 19 days after being caught by immigration officers in a restaurant having overstayed as a visitor.

Twenty-seven Albanian criminals who had been convicted of combined prison sentences of more than 87 years were also deported on the same flight.

The Home Office has doubled the rate of deporting Albanians this year compared with 2021 with 1,000 removed but that still represents a fraction of the estimated 6,000 that have arrived so far this year. There are a further 1,500 Albanians in UK jails, the largest foreign national group.

The Albanians now account for between 50 per cent and 60 per cent of all Channel small boat arrivals, which have doubled this year to more than 25,000 so far.

This week Priti Patel, the Home Secretary, met with an Albanian delegation to agree on new “joint ways of working” where UK and Albanian police will be stationed on each others’ borders to identify those with criminal records and fast-track the deportation of those who enter illegally within weeks.

Ms Patel said: “Today’s flight sends a clear message to those who flout our laws and immigration rules that you will be swiftly removed. Anyone who comes to our country in a small boat or other dangerous, illegal means should not expect to stay in the UK for long.

“We are working closely with the Albanian Government to tackle illegal immigration and have this week agreed on our joint operational plans to expedite the removal of Albanians who enter the UK illegally via small boats.

“Alongside measures in our Nationality and Borders Act, this will help end the cycle of last-minute claims and appeals that can delay removals. We will stop at nothing to remove those with no right to be here as the public rightly expects.”

Under the new deal, Albanian police officers will be stationed in Dover to cross reference migrants’ fingerprints and biometric data with Albanian criminal databases while six National Crime Agency (NCA) officers are based in Tirana to tackle immigration and organised crime.

The move is part of a wider agreement to deport criminals and illegal migrants to Albania struck by Home Secretary Priti Patel last Summer. As part of the deal, the UK has spent £1 million on a new police station at Rinas international airport in Tirana to help process the returnees.

A delegation of four officers from the Albanian state police forensic laboratories also met Home Office officials this week to discuss UK funding to boost their capacity for DNA analysis and processing data.