Two in three police force areas in England and Wales are experiencing rising gun crime, with one force facing levels six times higher than a decade ago, Guardian analysis of Home Office data has found. 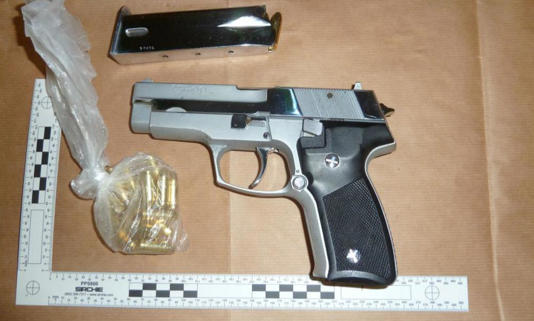 While firearms offences have fallen 14% on the whole in the past 10 years – helped by a big fall in gun crime in London – 29 out of 43 police forces have seen an increase in gun crime during that time. In eight of these it has more than doubled.

Gun crime has come to national attention in the past fortnight after the fatal shootings of three people in Liverpool in the space of a week. The most recent death was that of nine-year-old Olivia Pratt-Korbel, who was killed when a masked gunman burst into her home chasing someone else. On Thursday police said two guns were used in the attack, as they released CCTV footage of the suspect.

Concerns are now being raised about the growing availability of firearms in parts of the north of England and the Midlands as some police forces are struggling to tackle rising gun crime with fewer officers than they had a decade ago.

In the Cleveland police area, firearms offences have risen almost sixfold, from a yearly average of 22 to 127. Durham, Sussex, Lincolnshire, Northumbria, South Yorkshire, Norfolk and Kent police have all seen numbers more than double in 10 years.

While big cities dominate the headlines, the rise in gun crime in places such as Sussex, Kent and Cheshire is probably down to what has become known as “county lines” – urban organised crime groups pushing out into rural areas – said Peter Squires, a gun crime expert and professor of criminology at the University of Brighton.

See also  All Ashanti kings in order: The Ashantehene timeline in Ghana

He said: “In about 2010 there were gun crime hotspots where gangs were and there appeared to be some movement out of the problematic conurbations to places where police weren’t quite on the ball as much.”

London has halved its gun crime over the past decade, in part due to measures such as Operation Trident, the Met’s gun and gang crime unit. Less than a fifth of gun crime in England and Wales is now committed in the capital.

The clampdown in London and rapid rises in other parts of the country mean firearms crimes per person across the north of England are now higher than in the capital.

Guardian analysis found that the north-east, the north-west and Yorkshire and the Humber each had an average of 13 gun crime incidents per 100,000 people in the year to March 2022, compared with 12 in London.

In Cleveland, where the police force was put into special measures in September 2019, this figure was 32 firearms crimes per 100,000 people, more than three times the England and Wales average of 10.

This was followed by the West Midlands, Greater Manchester, South Yorkshire, West Yorkshire, Merseyside and Northamptonshire, which all had higher gun crime rates than London. Though about 100 illegal firearms are seized in the UK each month, Squires said no organisation has a clear idea of how many firearms are circulating. “Ninety per cent of crime guns are only used once and then they disappear,” he said.

Squires said that as the gun is not fired in 75% of cases where it is used to commit crime, agencies such as the National Ballistics Intelligence Serviceand the National Crime Agency (NCA) have trouble tracking them.

The NCA, which deals with serious and organised crime in the UK, said suppressing the availability of guns was a national priority. It said firearms get into the hands of gangs through criminal networks, which bring them over from Europe hidden in vehicles. Most are handguns, the NCA said.

Dr Robert Hesketh, a criminologist at Liverpool John Moores University and an expert in Merseyside’s gangs, said that in some parts of Liverpool it would be possible to buy a gun in a few weeks, but gangs often tended to borrow them from each other.

He said: “You don’t really need to own a weapon. You can get one from a holder, do whatever you have to do and give it back. The obvious selling point with that is basically you don’t have the responsibility of getting rid of it.”

Yvette Cooper, the shadow home secretary, said the Home Office was not doing enough to stop guns entering the country.

She said: “In many areas gun crime has now got worse but police forces are struggling to turn it round because they have lost so many neighbourhood police and are seeing widespread detective shortages after a decade of Conservative cuts to police numbers.

“Labour is calling for urgent national leadership to tackle gun smuggling, a summit to coordinate action against serious violence in all areas and for police to get back into communities.”

A Home Office spokesperson said: “We are working with law enforcement and other partners to ensure we have the right policies, intelligence, and detection and enforcement capabilities in place to tackle gun crime and prevent criminals gaining illegal access to firearms. We do this while continuing to ensure the licensing of legally held firearms is as robust as possible.”

British Accrahttp://britishaccra.com
Previous articleJack Draper: Jealous Brits were desperate for me to fail
Next article‘I will never ride a bike again’: why people are giving up on cycling