The Eddie Munson and Stranger Things backlash has begun on TikTok

Some Stranger Things fans are over the Eddie Munson hype on TikTok. Ever since the Dungeons and Dragons-playing metalhead showed up in season 4, the app has played host to tributes, cosplay creations, countless remixes of “Chrissy, Wake Up”, and more, and now subscribers have started lashing out over the character’s dominating presence. 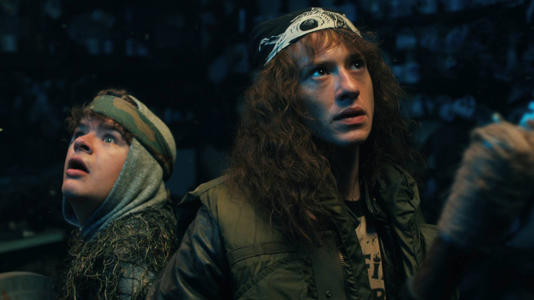 Eddie and Dustin in Stranger Things 4© Provided by Total Film

As spelled out in a report by Rolling Stone, TikTok user Naomie Lapointe recently posted clips of her time at a Chicago-based comic expo, which led to a run-in with the anti-Eddie crowd. At the event, she was dressed up as Steve Harrington – right after he gets attacked by Demobats in the Upside Down – but managed to find a myriad of Munsons on the day, and filmed herself singing and dancing with the lot of them.

Less than 24 hours after the video went live, the 24-year-old received replies that claimed “‘new fans’ were ruining the show” and that “cosplay is so cringe.” Lapointe told the publication that the comments left her feeling a little “discouraged”, and she’s not the only one who has been subject to mean-spirited gatekeeping.

Sapphire, a 19-year-old singer-songwriter, was forced to turn off the comments on all of their “Eddie Baby” posts after their track ‘Eddie’s Song’ was released on Spotify. Referencing Eddie’s tragic death on the show, it talks about the grief felt by Steve and Dustin (Henderson), who held Eddie (Joseph Quinn) as he bled out from his Demobat bites.

“I’m sorry but I miss 2019 Stranger Things fandom right now,” one person wrote on a video, according to Rolling Stone. “He was present for ONE season,” said another.

The backlash hasn’t gone unnoticed on other social media platforms either. “I cannot understand how people on TikTok are denouncing the Stranger Things fandom as a whole just bc some girl wrote a fansong for Eddie Munson. None of you would’ve survived broadwaystuck,” one Twitter user tweeted.

See also  Kim Kardashian under fire over advice for 'women in business' - saying: 'It seems nobody wants to work these days'

“Every time I stumble upon a TikTok about hating Eddie Munson cosplayers, I just block them. tapping ‘not interested’ is not enough,” said another. “I need to block them and never see them again. Let [people] enjoy fandoms and do what they want.”

British Accrahttp://britishaccra.com
Previous articleAlbanian migrants deported just days after illegally arriving in the UK
Next articleVoting closes in race to decide next PM. Who is the Next British Prime Minister.Find Out

We finally have a release date for the second season of Gangs of London. After the launch of season 1 in 2020, fans have been eagerly...
Read more
Entertainment News

See also  Farrah Forke has died, aged 54.
By continuing to browse the site you are agreeing to our terms and conditions
MORE STORIES