Kwasi Kwarteng will tighten benefit rules for part-time workers, requiring them to work longer hours or take steps to increase their earnings. 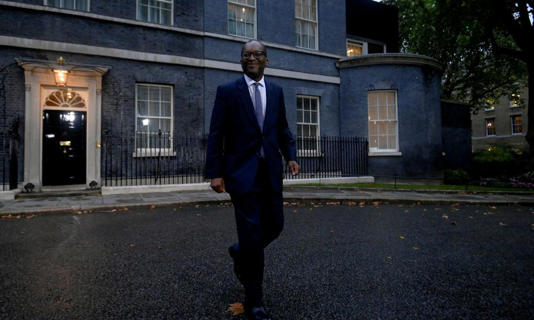 The new rule will require benefit claimants working up to 15 hours a week to take new steps to increase their earnings or face having their benefits reduced. The current threshold is nine hours, though it was increased this summer to 12 hours, which will come into force next week.

The further increase, expected to be implemented from January 2023, will affect only a small additional number of those on universal credit, about 120,000 people out of about 5.5 million claiming the benefit.

But the move is intended to signal a new offensive by the Treasury to fill job vacancies, with many industries facing chronic shortages.

Kwarteng will also announce new support to get over-50s into work, after a sharp increase in economic inactivity in that age group since the Covid-19 pandemic, with a significant number citing stress or mental health reasons.

The Treasury has found that economic inactivity in the over-50s is contributing significantly to shortages in the jobs market, one of the key issues driving up inflation.

“Our jobs market is remarkably resilient, but it is not perfect,” Kwarteng said in advance of the announcement. “While unemployment is at is at its lowest rate for nearly 50 years, the high number of vacancies that still exist and inactivity in the labour market is limiting economic growth.

“These gradual changes focus on getting people back into work and maximising the hours people take on to help grow the economy and raise living standards for all. It boosts incomes for families and helps businesses get the domestic workers they need, all while supporting economic growth.”

The changes will be announced at Kwarteng’s mini-budget on Friday, along with a slew of other measures including significant tax cuts and further details of the energy package to support households and businesses with bills.

Benefit claimants working up to 15 hours a week on the national living wage must now meet regularly with their work coach and take active steps to increase their earnings or face having their benefits reduced.

Work coaches will require the claimants to make commitments such as applying for jobs, attending interviews or increasing their hours.

Chloe Smith, the work and pensions secretary, said the aim was to address labour market shortages and helping people on lower incomes to increase their pay.

The changes will be UK-wide and certain groups will remain exempt from sanctions, including people who are unable to work due to long-term sickness or a disability.

See also  Ukrainian-born oil mogul found dead at £18,000,000 Surrey mansion
There are various ways you could sum up the new government to an outsider. It is vocally opposed to the nanny state, but its...
Read more
Business

See also  Woman, 48, charged with murder after body discovered in back garden in Northampton
By continuing to browse the site you are agreeing to our terms and conditions
MORE STORIES