Charlie Brooks is set to exit EastEnders just 18 months after she returned as Janine Butcher. The evil and manipulative Janine Butcher will be leaving Albert Square in a huge storyline later this year, it has been revealed.

Charlie returned to the BBC One soap and struck up a romance with Mick Carter (Danny Dyer). In the recent weeks, a manipulative Janine has continued to try and unsuccessfully drive a wedge between Mick and his estranged wife Linda Carter.

Speaking to The Sun on Sunday, Brooks said: “I was only ever due back to EastEnders for a year, but when [executive producer] Chris Clenshaw presented me with his idea for the story, I couldn’t say no to staying a little longer. 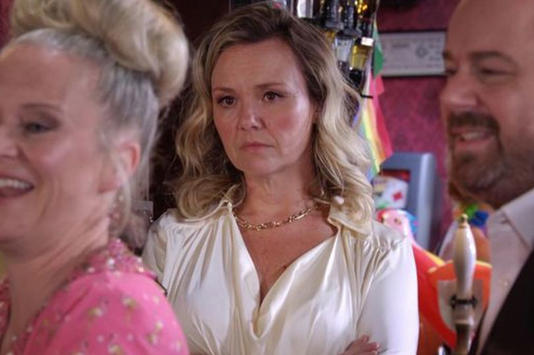 Her evil scheming doesn’t seem to be working© BBC

She also told The Sun on Sunday, “I’ve had an amazing time, as I always do when I go back. But as always with Janine, she probably should not outstay her welcome – for everyone’s sake.”

It comes as Danny Dyer’s exit looms – but it is not known whether or not they will go together. A source said at the time his departure was announced: “Danny has offers coming in left right and centre, and a lot of the things he has wanted to do he can’t because EastEnders have such strict rules about what he can and can’t do. It’s driven him mad at times and he’s now ready for a change.

“But it hasn’t been easy to walk away, BBC bosses have been desperate to keep him. But he’s been insistent and when Sky approached they gave him an offer he couldn’t refuse. It’s a new chapter for Dan and he’s over the moon.”

It is not yet known if the pair’s exit storylines will be linked but as Janine has just found out she is pregnant with Mick’s baby. “I like seeing Janine fall in love,” Charlie said of the recent storylines which has seen her try woo Mick.

“But at the same time, I would never want her to change. She’s unashamed and unapologetic, which I admire. I’d like to see her be wild and fall in love, then see what sort of trouble that lands her in! She’s living her best life and figuring out who she is as a mother.”

The sad demise of former actor and immigration lawyer, Kwame Amoako occurred days after his birthday in the United Kingdom.He left behind his wife,Dilda...
Read more
Entertainment News

We finally have a release date for the second season of Gangs of London. After the launch of season 1 in 2020, fans have been eagerly...
Read more
See also  Peruzzi drags former label boss yet again
Entertainment News

Prince Harry and Meghan Markle are set to return to Los Angeles, without any peace deal being struck between them and King Charles or Prince William, according to Gayle King. The...
Read more

See also  [VIRAL PHOTO] Meet Shatta Wale; The Infinix Brand Ambassador Who Uses iPhone
By continuing to browse the site you are agreeing to our terms and conditions
MORE STORIES