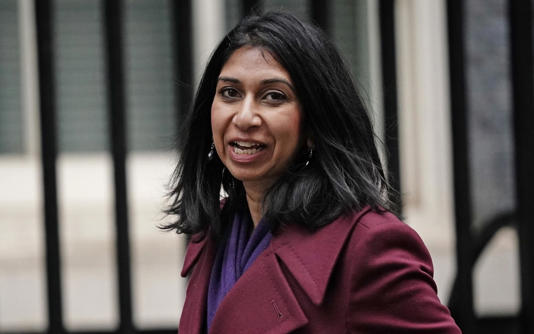 The Home Secretary is insisting that immigration must fall even as Britain pushes for growth, The Telegraph understands.

Suella Braverman wants the Government to meet its manifesto commitments to bring down net migration, as ministers consider plans to relax visa restrictions on some foreign workers to tackle labour shortages and attract the best talent from across the world.

Liz Truss and Kwasi Kwarteng, her Chancellor, are understood to believe some sectors may need additional migrants to help fulfil the Government’s ambitious economic growth plans and have ordered a review of current visa restrictions.

However, Ms Braverman is among Brexiteer Cabinet ministers including Kemi Badenoch, the International Trade Secretary, and Business Secretary Jacob Rees-Mogg who believe this must not lead to an overall rise in immigration and must pass the litmus test of genuinely boosting growth.

A Whitehall source said: “The Home Secretary does not believe that reducing net migration needs to mean we go to lower growth. You can achieve both. You can solve the economic bottlenecks that need to have higher skills but at the same time bring down aggregate migration.”

It comes as Mr Kwarteng on Sunday vowed there would be “more to come” on tax cuts, including potentially extending the freeze on fuel duty, despite concern the pound could slump further.

However, there will be no new spending review despite rising inflation, which means public sector workers will have real terms pay cuts before 2024 and schools and hospitals will have to make tough choices about budgets.

Rachel Reeves, the shadow chancellor, will on Monday unveil Labour’s plan for growth amid apparent splits within the party over how to respond to the Government’s tax cuts. Sir Keir Starmer refused to reverse the cut in the basic income rate to 19p, while Andy Burnham, the Manchester mayor, accused Labour leader of lacking the “fight” to reverse the policy. However one poll suggested that Labour was on course for a 56 seat majority at the next election.

Ms Truss’s immigration review will consider whether changes need to be made to the shortage occupations list, which will allow key sectors to recruit more overseas staff. It could also endorse a loosening of the requirement to speak English in some sectors to enable more foreign workers into the country.

Downing Street sources said the Government was not advocating an increase in immigration but changes to the mix. “That will involve increasing numbers in some areas and decreasing in others. As the Prime Minister has made clear, we also want to see people who are economically inactive get back into work,” they said.

The current 30-40,000 cap on seasonal workers is also likely to be lifted in the “short term,” although Ms Truss made clear during her leadership campaign she expected the industry to “address longer term skills shortages.”

Ms Braverman is understood to believe the Government needs to deliver on its manifesto commitment to bring down migration because of the pressures it places on public services.

Whitehall departments seeking any easing of visa restrictions to plug shortages with foreign workers will be expected to demonstrate that it would have a meaningful impact on economic growth by increasing GDP per capita.

Home Office officials believe that most skills gaps could still be plugged through the current points-based immigration system and that more needs to be done to incentivise back into jobs many of the 10 million UK welfare claimants who are fit to work.

Farming ‘could use automation’ instead of foreign workers

The Home Office has consistently argued that industries such as farming could be more innovative through use of automation rather than relying on foreign workers while officials cited trades such as HGV drivers where training schemes were dropped in favour of Eastern European workers.

Mrs Badenoch is understood to be concerned that any loosening in immigration rules must not lead to EU-style free movement. Her views are understood not to have changed since she wrote in July for The Telegraph that controlling immigration was vital to “manage the pressures it puts on housing and public services.” They said she would be articulating that view.

Mr Rees-Mogg is said to be sympathetic to concerns that any loosening of restrictions on skilled workers’ visas must not lead to an increase in overall immigration.

He has told colleagues he would support changes only if they were shown to have a “meaningful” impact by growing GDP per capita and that they work. Sources cited the introduction of an extra 5,000 temporary visas for foreign HGV drivers last September where few were taken up. “If you are doing a dash for growth, it’s got to be meaningful growth as well,” said a source. “We cannot just keep on relying on [foreign workers] to solve problems.”

Government sources denied there was any rift over the issue. “I would not say row but I think different departments have slightly different perspectives,” said one source.

On Sunday, Mr Kwarteng said Ms Braverman would be presenting the “updated” immigration policy in the next few weeks: “The whole point about the Brexit debate was that we need to control immigration in a way that works for the UK, and that’s what the Prime Minister and the Home Secretary are totally focused on.”

Concerns over the tax gamble in the mini-Budget have prompted several Conservative MPs to privately discuss standing down at the next general election, the Telegraph understands.

MPs who vote against the finance bill to implement Friday’s tax changes could lose the Conservative whip, although the Government is considering allowing them to remain in the party because the fiscal event was not a full Budget.

The huge prize puts them among some of the richest people in the country (Picture: REX)© Provided by MetroCamelot said this evening that the UK...
Read more
Politics

Counter-terror police are investigating more than 100 reports of suspicious activity flagged to them by members of the public following the death of Queen Elizabeth...
Read more